It was December 20, and we were sitting in Chetumal, Mexico preparing to cross the border into Belize.  We were not totally sure what we would be doing for Christmas and homesickness started to kick in.  We just spent the last two weeks enjoying the glorious Caribbean, but we were itching to get back into some cooler weather.  Then, our Canadian friends (Hawkin and Steve) convinced us to join them in Lake Atitlán; which sounded like fun but we had just over 1000 km (about 660 miles) between Chetumal and Lake Atitlán!!!!!  It was a crazy decision, but we decided we were done with white sand and aqua blue water (I know we are spoiled); ultimately we have no regrets about our decision to make the journey.

We spent the night in Agua Azul, which were some of the most beautiful waterfalls we’ve seen.  Unfortunately, they had rain at the falls the day before which made the water more like ‘Agua Cafe’ rather than Agua Azul, but they were still beautiful.  The camp site was more of a parking lot with a lot of “lookyloos” but it was an uneventful night except when a local boy came up to Austin and smacked him on the rear end with a piece of styrofoam.  If we weren’t so stunned by his audacity we would have laughed harder.  We will always remember Agua Azul because it marked being on the trip for exactly one month and the first day of winter. 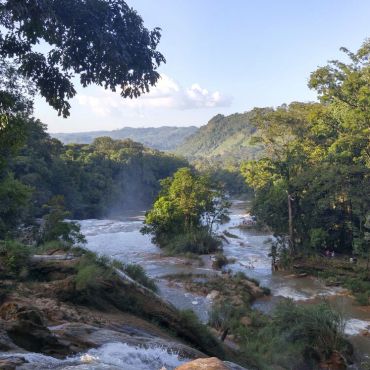 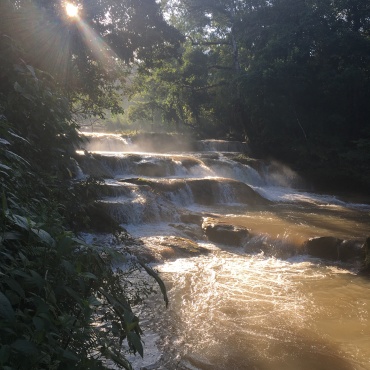 The next day we crossed the border, which was an adventure in itself, however we were welcomed into Guatemala with a little Christmas music…

We finally arrived at Pasaj-Cap on Lake Atitlán on December 23 and we were greeted by our friends James and Bel, who found our glorious camp site.  A quick side note for anyone thinking of traveling to Lake Atitlán, we would highly recommend staying at Pasaj-Cap.  It is so relaxing and peaceful, you could easily stay a week.  There are water taxis that you can catch to visit the other towns, or you can walk into the town of San Marcos.  Oddly enough I had some of the best Italian food in San Marcos.  The property sits right on the lake where you can view three different volcanoes.

On Christmas day we decided to have an “overlander” potluck supper.  Austin and I decided to get really american and make jalapeno poppers wrapped in bacon and mashed potatoes.  The food was amazing, but the company was the best part.  We are thrilled to have met Nynke and Nils from the Netherlands, Luisa and Jose from Spain, Tim and Hailey from South Africa/San Diego and Norbert and Bettina from Germany. 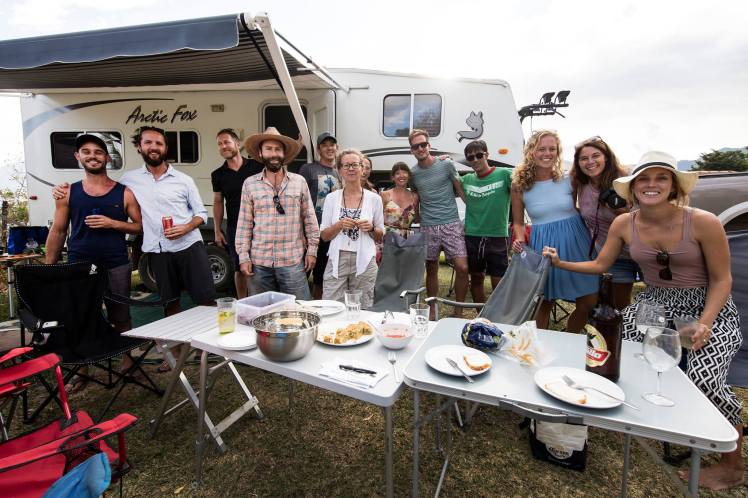 We missed our family and friends, but we will never forget Christmas 2016 in Guatemala!

2 thoughts on “Christmas in Guatamala”