From our last post, you now know that the place we said we would never go was El Salvador.  We arrived in El Salvador two days before the new year and headed directly to the coast, not knowing exactly where we would stop for the night.  We were exhausted from the drive and crossing the border, so we were looking forward to a quiet night. After locating and securing a decent parking lot for the evening, we walked the beach and had dinner while viewing one of the most brilliant sunsets.

Leah said on our walk home from dinner that she was ready for bed even though it was only 7:00. We got back to camp, ready to hit the showers and snuggle into bed when we were pleasantly welcomed by five other overland couples that we had not yet met. We enjoyed new stories of the road and cold beverages, all while Matty softly serenaded the camp. So fate did not grant Leah’s her early bedtime, but we had an absolute blast getting to know our new friends (Matty and Ingrid, John and Mandi, Pete and Natasha, and Mark and Sas). As an added bonus, our Canadian friends Hawkin and Steve showed up and invited us to stay at their campsite down the road, on a private beach.

For the next eight days we ended up staying  in a gated community, one with a private beach and access to a sea cave!  I stole the photos below from Hawkin, since we both neglected to bring our phones on the sea cave hike. 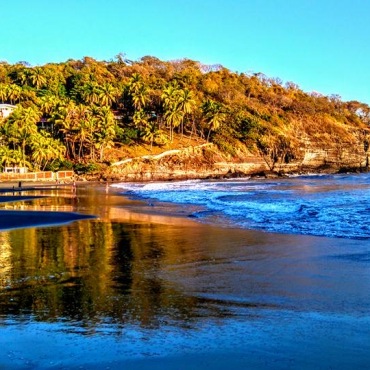 We wanted to start the New Year off right, so we decided to hike the tallest and one of the most active volcanoes in El Salvador! To start, I would like to give a clarification to the term “active” volcano; since we have been in the area of so many volcanoes referred to as active, dormant and extinct. As defined on the Oregon State Universities website;

“Those definitions are not set in stone, and they mean different things to different people and to different volcanoes. One of the simpler ways to answer is that an active volcano is one that has erupted since the last ice age (i.e., in the past ~10,000 years). That is the definition of active used by the Global Volcanism Program in their catalogs. A dormant volcano would then be one that hasn’t erupted in the past 10,000 years, but which is expected to erupt again. An extinct volcano would be one that nobody expects to ever erupt again. These are human definitions of natural things – there have been a number of eruptions from “extinct” volcanoes!”

The information about this volcano hike was fairly easy find, it’s also a well traveled hike with security and a guide provided. From the information we had read, we were at the understanding that the hiking group would leave at 11AM. Starting the day with our normal morning activities, breakfast, coffee, and cleanup; we were able to leave camp  with just enough time to make 1.5-2 hour drive. With luck on our side we arrived at the parking lot of the Parque Nacional Los Volcanoes just 5 minutes before the group set out.  It took us about two hours to reach the summit, where we enjoyed PB&J’s, apples, granola bars and stunning views. 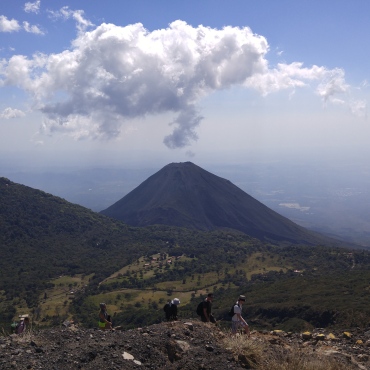 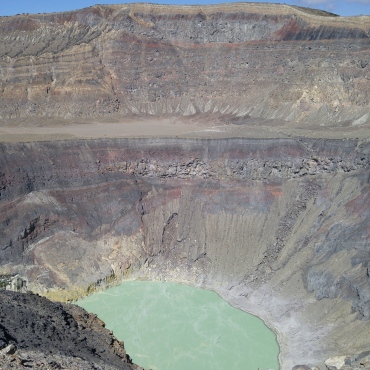 The hike took us about four hours total and we would say it’s a must see and do if you ever travel to El Salvador.

The Search for the “Seven Waterfalls”

In our travels we have made many good friends relatively quickly. It might be that we all come to be friends because of our common interests, personalities or because we all decided to live out of our cars for a year. One commonality that we have noticed as we swap stories, is that we have all gotten lost en route to a destination from the direction given by a local…so here is our story.

In the course of our adventure to find the “Seven Waterfalls” we had started out the day by having a rough guess as to where this particular destination was located; just west of Juayua. Our host had warned us to not follow our navigation once we came to a specific Y in the road; which happened to be at the town of Nahuizalco. Along our drive we did follow the navigation, since we were all in agreement that we had doubts of our hosts knowledge of this area. It turns out that he was right and the navigation was wrong. We stopped when we reached the end of a paved road in a sketchy neighborhood. Once we had corrected our mistake and made it to the town of Juayua, we figured that asking locals around the town square would get us where we needed to go.

We ended up asking about six different people; “Perdon, sabe usted donde siete cascades?” Each person was eager to tell us that they had never heard of any place in the area. Back to the navigation, and on the road we went. We were destined to find these falls, even if it was going to take the rest of the day. Roughly 20 kilometers down the road to what we had thought might be it, then another 15 north of that point and still nothing. Since not one of us four travelers had access to internet we decided that we needed WiFi; so back down the road we went to the town of Juayua.

As we reached Juayua, we asked another local about the waterfalls, but he pointed at the direction we had just come from.  This is the moment where we contemplated giving up; when all of the sudden, we were flagged down by a man who turned out to be an American expat.  He assured us that we were close, let us use his phone to look up the waterfalls and even offered to go get his motorcycle and escort us down to the falls.

We don’t know if it was exhaustion or too much hype, but we ended up not being overly impressed with the waterfalls we found.  For one, it turned out that the waterfalls  were part of a hydroelectric plant and second it was really crowded for a Thursday afternoon.  We don’t believe that we actually made it to the “Siete Cascades” so we will just have to return one day and continue our search.

We spent about 15 days in El Salvador and they have been some of the most memorable days of our trip.  On our final evening before we headed to the border we experienced our first turtle release at Tortuga Verde.  We would say this is another must see and do when you travel to El Salvdaor. Until next time…